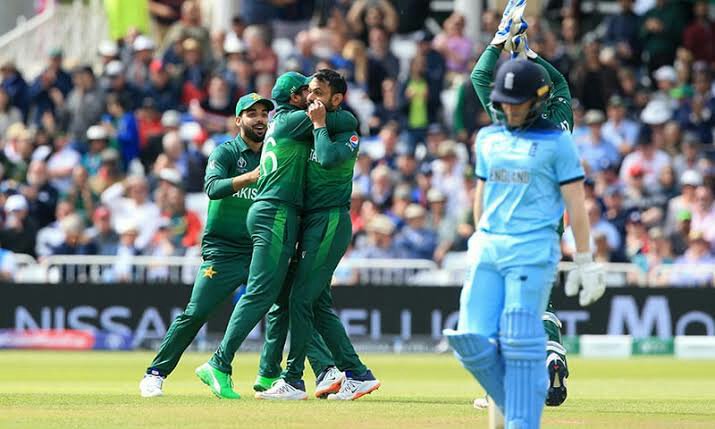 Unpredictability at it’s best. Pakistan pulled off a sensational win against England in their second match of WC2019.
Pakistan looked extremely good and positive in that game and they showed to the World that they can beat any team on their day.
England wanted to chase the target because of their strong batting line-up. They decided to bowl first after winning the toss. Mark Wood were included in place of Liam Plunkett just because to test Pakistani batsmen with short deliveries.
Pakistan’s openers started really well and they put on 80 runs partnership. They played the new ball quite well.
After that Babar Azam came to bat and he played his natural game and just batted very sensibily
The star performer with the bat was Mohammad Hafeez. Who smashed first bowl which he faced to the fence for four.
Hafeez had his chance when Jason Roy dropped him on 14 but after then he batted superbly. He made 84 from just 62 balls with 8 fours and 2
sixes.
Sarfaraz Ahmad also played a very good innings. He made 55 on 44 balls.
Pakistan ended up with 348 for in their 50 overs giving England quite a stiff challenge.
Pakistan opened the bowling with Shadab to get England’s openers out early. He answered to the call and got the wicket of Jason Roy.
Aamir bowled very well in his first a spell but Babar dropped Joe Root on his bowling.
Pakistan have taken 4 English wickets when their score was 118. Malik and Hafeez used as a fifth bowling option and both grasped one wicket each.
Jos Buttler together with Root formed a parternership and smashed Pakistani blowers to all parts. Both got out after making their 100s.
In depth overs, Pakistani bowlers bowled really well especially Aamir and Wahab. They mixed it up and didn’t gave much to English batsmen to free their arms.
Pakistan have won that game by 14 runs and surprised the whole World.
Wahab was little expensive but he took 3 important wickets. Aamir and Shadab have taken 2 wickets each.
This was the most exciting game of the tournament so far. 2 hundreds being made and this was the first time in history of World Cup that the team who have two centuries in its side lost the game.
Michael Vaughan who one day before said that England would win easily but he said during lunch break that he was nervous because another Pakistan had arrived.
So, unpredictability of Pakistan is now become the debate of the tournament. Pakistan must not lose their for now and they have to play positive cricket in upcoming matches. They must now consistent enough to be among favourites to lift the trophy.

I am a Student of MASS COMMUNICATION at NUML ISLAMABAD. My goal is to become a sports journalist. View all posts by zeerakbilalsatti